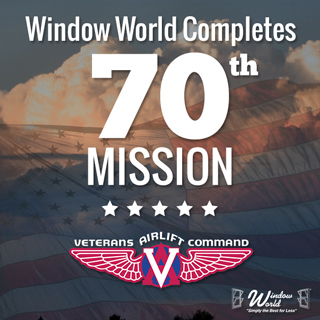 The VAC provides free air transportation to post-9/11 combat wounded soldiers and their families through a national network of volunteer aircraft owners and pilots. For many wounded warriors with prosthetics or other mobility issues, flying in private aircraft rather than commercial planes is the best way to accommodate their unique needs. Window World has been a partner with the VAC organization for over five years. The Capital Region Tough Mudder, designed to test participants’ teamwork, stamina and all-around strength, was one of the more than 100 Tough Mudder races held nationwide since 2010. To date, these events have raised $6.5 million for the Wounded Warriors Project. Despite multiple injuries sustained fighting overseas in the fall of 2013, Emmons and Bullock, aided by Konvicka, completed the grueling 10-to-12-mile course, highlighting their determination and skills. Following Saturday’s race, Emmons, Bullock, with wife Jessica and son, Aidan, and Konvicka, with wife, Karen, departed from Washington Dulles International Airport on the Window World corporate aircraft. Window World’s Chief Pilot Johnny Johnston is an army veteran who also served overseas. “I’m beyond fortunate to fly for a company that strongly supports our nation’s soldiers, alongside of the VAC,” said Johnston. “My dream is to continue working with Window World in aiding our wounded warriors for years to come.”

Window World proudly supports the Veterans Airlift Command in providing air transportation to wounded warriors and their families for medical and other compassionate purposes. The Veterans Airlift Command offers soldiers returning from combat, often with devastating injuries and unable to traverse commercial airports, the opportunity to fly worry-free to visit their families and receive treatment. Window World has flown over 75 missions and has surpassed over $1 million dollars in flights and in-kind donations since we began our partnership with the VAC. With a number of veterans in the Window World family, we know how meaningful a simple “thank you” can be. Participating in this special program is our way of conveying our immense gratitude for America’s Veterans.